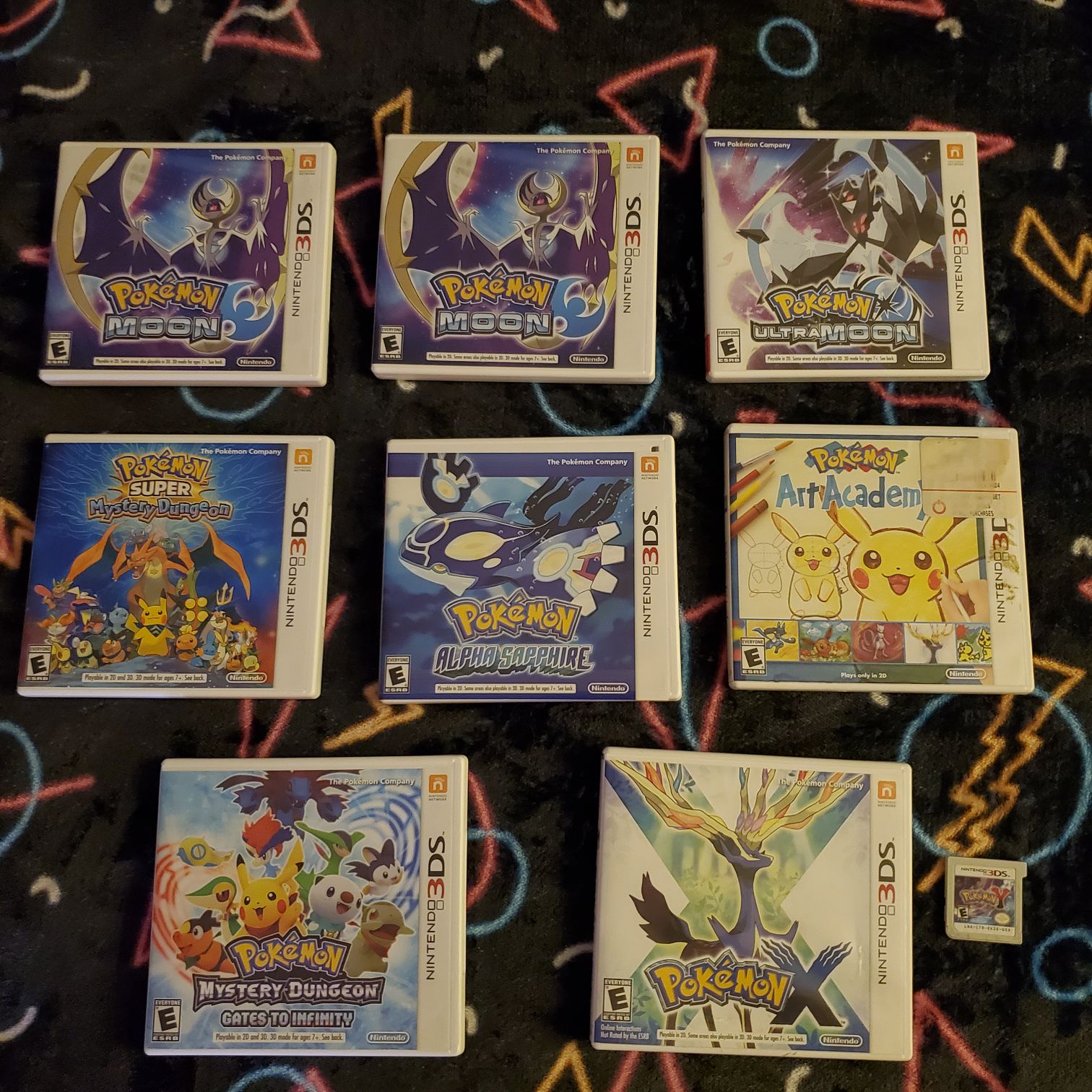 Not gonna lie, the 3ds is probably my favorite line of systems. The library is completely unmatched, and the systems all look great (aside from the 2ds which looks very funny so I love it for that). When the 3dsXL came out my mom sold my 3ds to get the money for it without telling me because it was supposed to be a surprise. I cried. Fun times! I love the 3ds!!

Pokemon Moon
I played this two and a half times! Currently about halfway through my third playthrough haha. Ended up with two copies because my brother didn't want his and I'm always down for more Alola! The games of gen 7 are by far some of my favorites, though they definitely have their flaws.

Pokemon Ultra Moon
This game has the second most playtime of any Pokemon game I have on it, sitting at a little under 300 hours. This game is so good! The post game content is lovely! Definitely the game I've gone back to on and off the most- the shiny hunting methods, between Ultra Wormholes and SOS Chaining, are so easy and engaging. This is also the first game I completed the Pokedex in!!

Pokemon Super Mystery Dungeon
I have started and restarted this game at least 10 times by now and cannot seem to get engaged by it. I also keep getting Turtwig on the Pokemon Quiz and feel especially lame. The story is interesting I just do NOT care for the dungeon crawler thing.

Pokemon Alpha Sapphire
GOD funny story about this game. I had well over 200 hours in it back in the day, had a high ranking secret base, aced all contests. After a few years, I wanted to replay it for the Hoenn Experience- but I only have the one copy, and I hadn't hacked my 3ds yet. I transferred all my Pokemon into bank and restarted the game, set to do a Nuzlocke... I have failed the Nuzlocke 3 times now. Good game and all but... Aaghhh.. it's because I hate grinding.

Pokemon Art Academy
This game, no lie, taught me the fundamentals of art. Shading, sketching and basic shapes- all of it. I developed my art skills in this game as a 10 year old. I haven't touched it in years, but I'll never forget playing through it for the first time. It's crazy what I was able to do on such a small screen!

Pokemon Mystery Dungeon: Gates to Infinity
This was my first PMD game and I liked it a LOT as a kid! I don't know why I have never been able to get similarly invested in another game since, I've tried Explorers of Sky and Super Mystery Dungeon. I guess my attention span was better as a 10 year old. I don't remember a whole ton about this game other than crying at the ending- I finished the game while getting ready for school in the morning.

Pokemon X
I had... so much in this game, but my save file corrupted sometime before Pokemon Bank came out and I lost EVERYTHING. Couldn't bring myself to try and replay the game for the longest time- I had all my Pokemon from Black 2 on that save file, my original team. The worst part is- I don't remember any of my Pokemon X team! I feel awful! I know I had a Chestnaught but that's it! Been replaying it lately, up to the Laverre Gym so far.

Pokemon Y
So, I originally got this game shortly after X because I wanted to play both versions. I finished the main story, put most of my Pokemon into Bank, and gave it to my brother who wanted to try a Pokemon game. Currently his old save file is still on there, though none of his Pokemon are. I don't remember who my Y team was either, aside from a Chestnaught and Linoone. I also got my very first shiny in this game, a Vanillite named Snowcone!