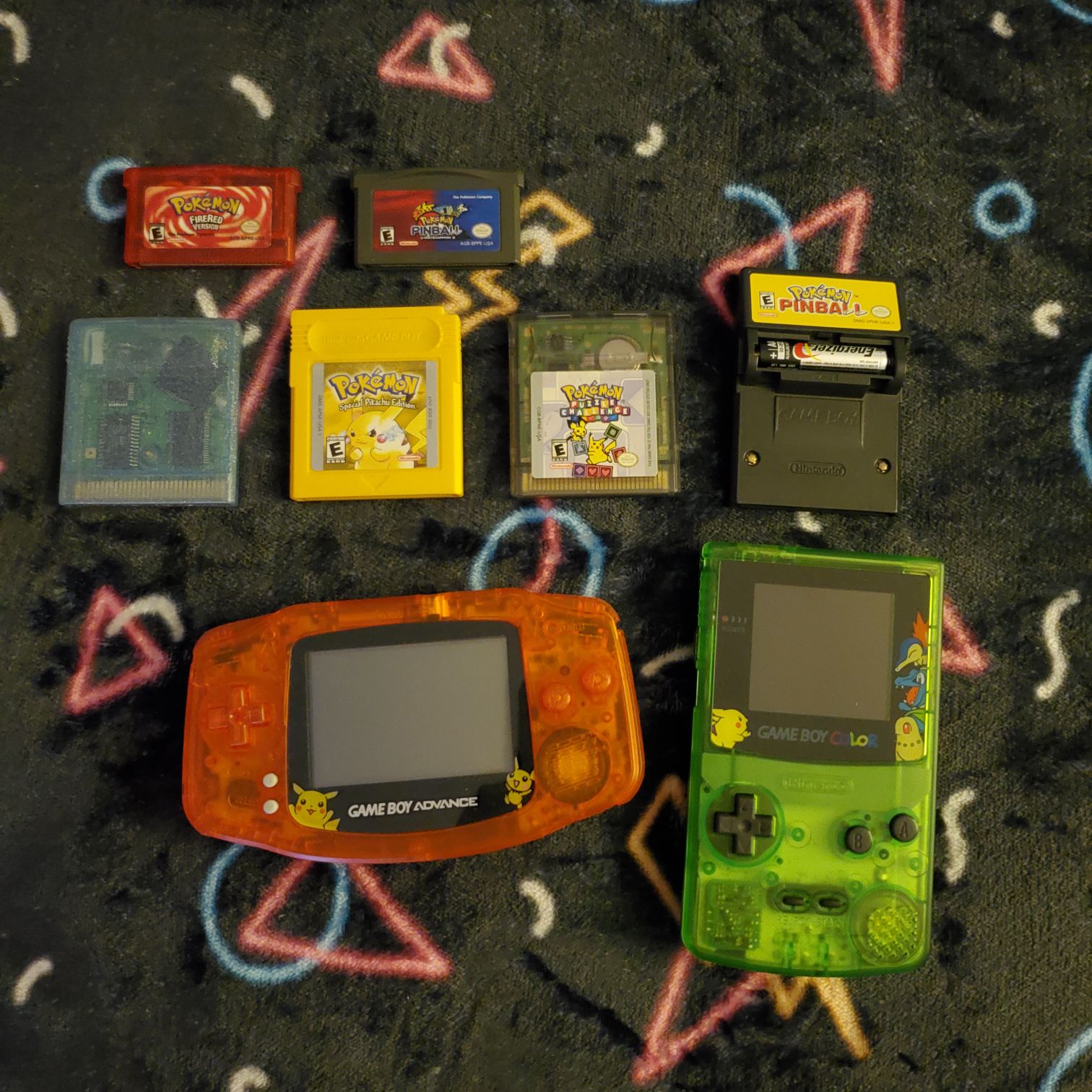 I got into Pokemon long after the Gameboy was relevant, but I've always been fascinated by this era in gaming. So much changed so quickly, but I don't really have enough to separate the Gameboy from the Gameboy Advance.

Pokemon Fire Red
This is my first Gameboy game, as well as the only bootleg. Back when I got this as a kid, I didn't know how to tell a fake from a real one. The game itself runs just fine though from what I can tell- I never got past the third gym or so due to getting bored with Kanto games too easily.

Pokemon Pinball: Ruby & Sapphire
I love the Pokemon Pinball duo of games and REALLY wish they'd make more. Ruby and Sapphire was a bit too visually crowded and bright for my liking at first, but after playing it for a bit I've grown to really enjoy it. Definitely my go-to GBA game for sure.

Pokemon Crystal
Even though this game is missing its label, I know it's legitimate. My cousin handed it down to me- the save battery is dry. I got a bunch of batteries to replace it, but never learned how to solder, so I ended up just pirating it onto Virtual Console instead. I love the clear casing on GBC games. Crystal is such a pretty game.

Pokemon Yellow
Yeah funny story about this game- While playing in the car, I stopped for a minute to look out the window. I heard the starting sound effect despite not having selected a name. When I loaded into the game, the trainer sprite was invisible and named NINTEN. All the NPCs were moving in the wrong positions, running through walls and such. The rival was automatically named SONY. I never figured out how to recreate this weird event.

Pokemon Puzzle Challenge
I'm kind of a sucker for these little puzzle games. This one is a Pokemon version of Panel de Pon, and I love it a lot. All the sprites are SO cute, and the music is wildly catchy. By inputting cheat codes, you can even go to an unfinished version of Panel de Pon GB! It's so cool, definitely one of my favorite Gameboy games.

Pokemon Pinball
Fun fact about this game, it was the first time the Japanese original theme song, 'Mezaste Pokemon Master', was released officially in the US! The catching theme on Blue Field is a GB Remix of it, it's really cool! Aside from that, I also really love this game- it's really addicting and the challenges are always so fun.

Custom Pokemon GBA
Currently working on getting an IPS screen for this one, I absolutely adore clear plastic tech. Modding Gameboys is a hobby of mine and this GBA is definitely special to me- all the parts are third-party, but it's okay.

Custom Pokemon GBC
This was my first custom Gameboy! I even installed an IPS screen due to it not needing soldering. It gave me a lot of trouble, and required a couple shell swaps before I got the look I wanted, but it's so special to me. Definitely one of my favorite handhelds to use, it works wonderfully and looks even better than I ever could have expected.