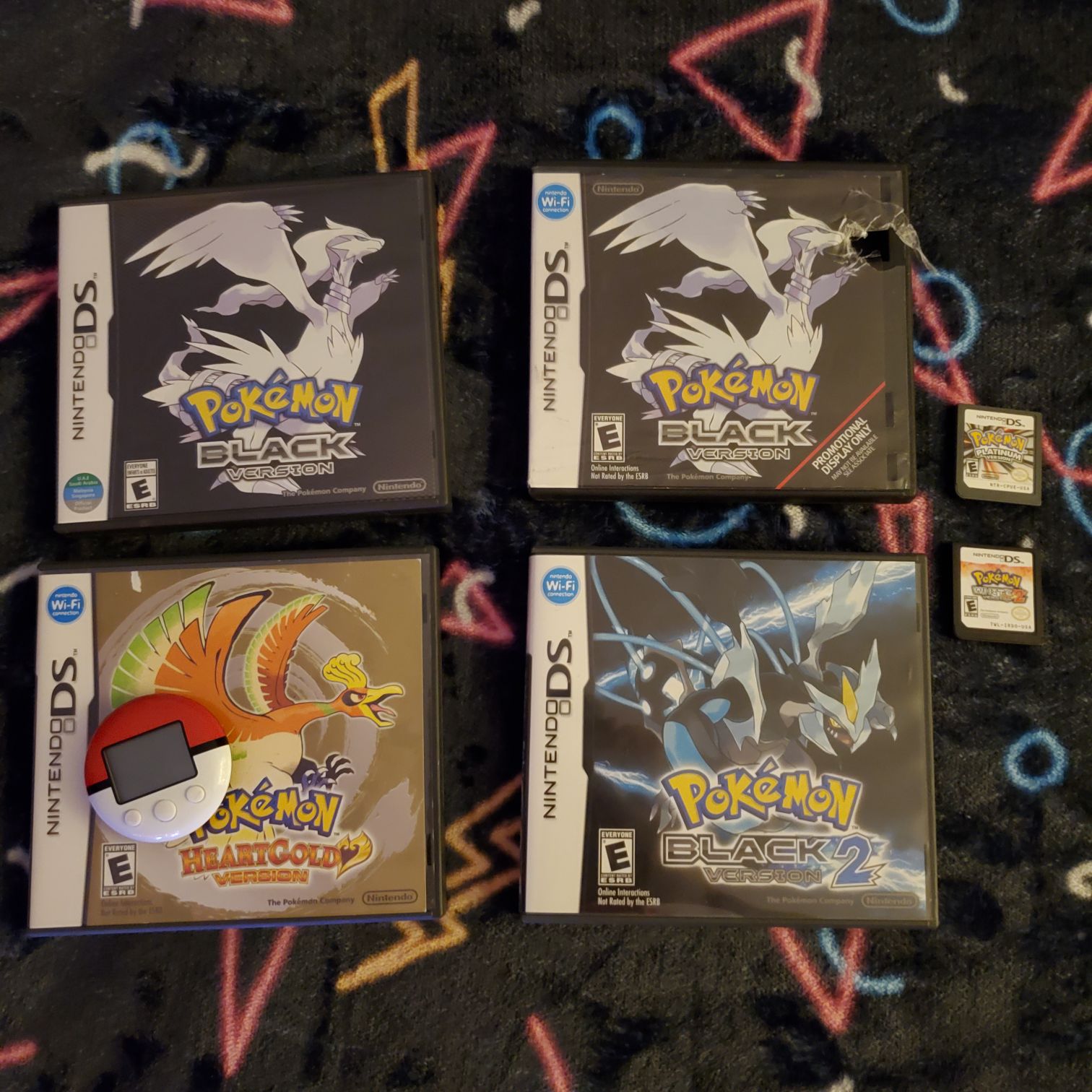 Pokemon Black 2 was my first game! This era means so, so, so much to me. All the sprite work is so beautiful and I have so many wonderful memories in these games.

Pokemon Black
I first played Pokemon by stealing my friend's copy of Pokemon Black when he was busy. Eventually, I got my own copy years later. The first copy of Pokemon Black that I had, I lended to somebody who is now my ex. I'm never going to see that game again. The second game I got from my cousin and I still have and finished it fully. Neither have normal boxes though- the first one is from the UAE, and the second is a promo box with a weird hole in it.

Pokemon Platinum
As a kid I had Pokemon Pearl, but it fell out of my backpack and got run over a truck. Years later, I came across Platinum at a Gamestop at 40$ (high price at the time, can you believe it?!). I held off on playing this for so long due to finding Sinnoh painfully slow, but I did finish eventually! I'm excited for the Sinnoh remakes, I hope they're more enjoyable.

Pokemon HeartGold
I don't have this game anymore, but I have the PokeWalker! I lended the game to my now-ex and will probably never see it again. The Pokemon I had in it are stuck in Pokemon Battle Revolution, and the PokeWalker is in great condition aside from a dead battery. I gave up on HeartGold because I couldn't beat the 5th gym due to being a very weak child. I'd love to get it again someday though- Johto is such a beautiful region.

Pokemon Black 2
The first Pokemon game I owned myself- and definitely one of my favorites. The story, Pokemon, music, and environments of Unova are all so wonderful and beautiful. I've put nearly 500 hours into this over the years. As a kid I focused mostly on trading and GTS Negotiations, but over time I've come to appreciate all the other aspects of Unova. The characters are phenomenal. I'll never forget this game.

Pokemon White 2
After I finished Pokemon Black, I wanted to replay its sequel- the issue is I didn't want to delete my childhood Black 2 save file. I managed to get a copy of White 2 for Easter and, wow- playing the sequel right after the original is a wonderful experience. I really could compare and contrast Unova to its 2-year-later counterpart. I also finally defeated White Treehollow and got the shiny Dratini! His name's Petey:)