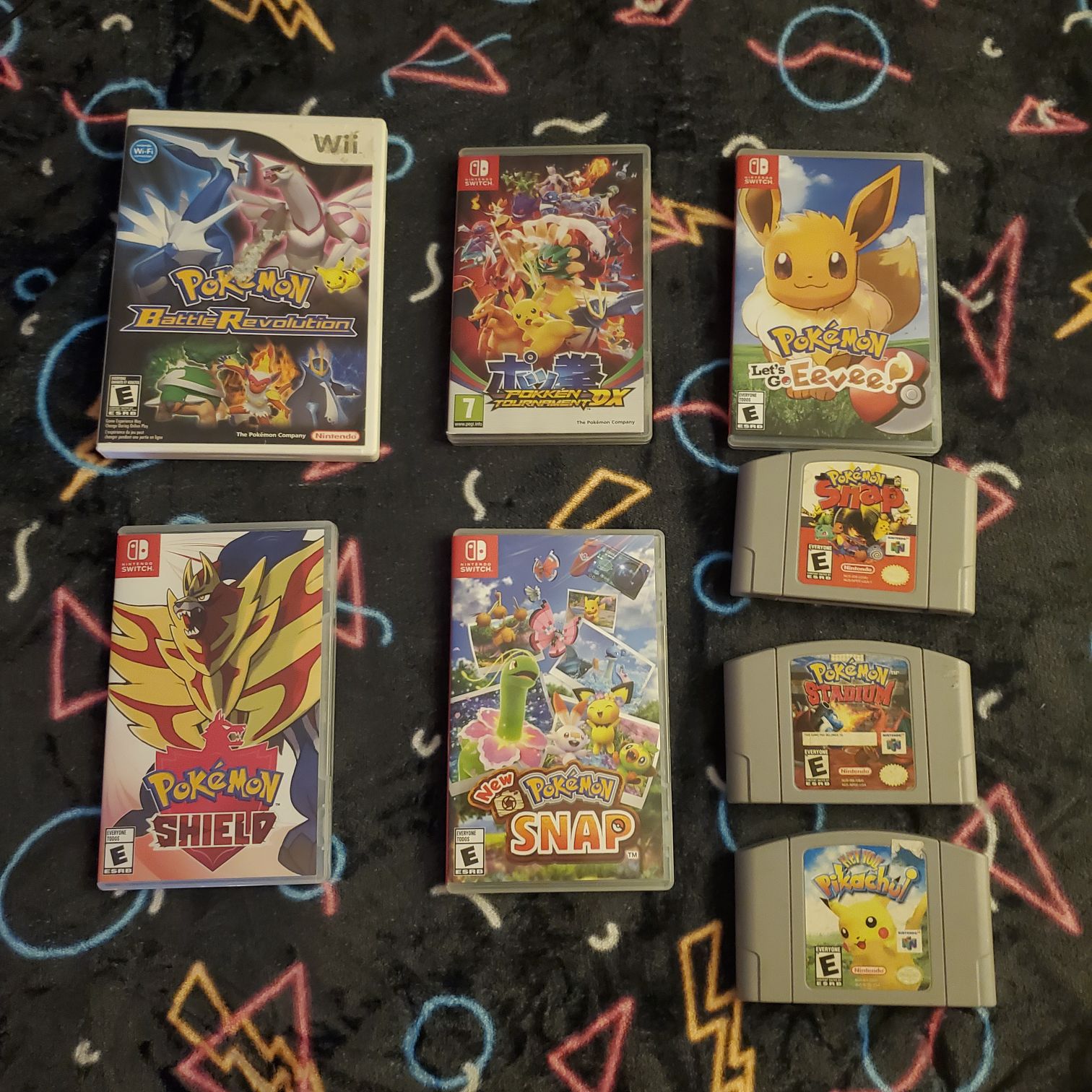 Before Pokemon Shield came out, I didn't do much with the console games Pokemon put out. They were (and are) some of my favorite N64 games, and of course this picture doesn't include the ones I have downloaded, but I'm really happy with my small collection of console Pokemon games.

Pokemon Battle Revolution
The first time I got to see Pokemon on the big TV also ended up being largely pointless in the end. I mainly used this as a way to play Pokemon with friends who didn't have their own game, and for battling it worked fine. I never really did much in it though, and now its only purpose is holding the Pokemon from a long-gone save file of HeartGold I no longer have.

Pokken Tournament DX
I was way too excited for this when it came out on the Wii U, and I played it every once in a while, so I grabbed it for the Switch as soon as I could. I don't know why my copy is PAL, or why I got it at all really. Probably just desperate for Pokemon content on the Switch. I have played it maybe twice, both times thinking 'Wow, I've really never been good at Tekken'.

Pokemon Let's Go! Eevee
When this was announced I was already suffering from Kanto burnout and I nearly cried thinking of how it won't be over for a while. Cute game though, love using my Pokemon as transportation. Local co-op was really, really cool too and it let me play with my brother! I wish they'd do it more often.

Pokemon Shield
I Love this game! I love this game so much! Not my favorite Pokemon game by far but I found all the towns to be beautiful, I loved the characters, and the customization is almost perfect (I wish they'd stop gender-locking clothing). I completed all 3 Pokedexes in it, though I do regret trading all my Pokemon up to this game. The shiny hunting methods suck and I wish I had my Alolan team back in Ultra Moon.

New Pokemon Snap
Pokemon Snap is my favorite N64 game and I'm so happy it's on the switch now! I adore everything this game does- it's SO beautiful and there's an almost overwhelming amount of ways you can interact with the environment. It's super in-depth for what's basically an on-the-rails shooting game. I haven't finished it yet due to spending like, a week straight just on the first two areas and then burning out, but I'm excited to!

Pokemon Snap
Due to how pathetically short this game is, it was the first N64 game I 100% completed! I remember adoring this game as a kid and being absolutely obsessed with getting every secret possible, but playing it again recently... it's janky. The controls are so uncomfortable, though I guess most N64 games are like that. It's still a really cute game though and holds a very special place in my heart.

Pokemon Stadium
Like Pokemon Battle Revolution, this doesn't have much sentimental value for me past being a battle simulator I played with friends every once in a while. Unlike Pokemon Battle Revolution, I had none of my own Pokemon in this game and got bored even more quickly. I feel like if I had a Gameboy Player and a solid Gen 1 game, it would be a lot more fun.

Hey You! Pikachu
I was absolutely obsessed with getting my hands on this game as a kid. Being able to TALK to PIKACHU sounded surreal, even if I knew that it would be a bit awkward due to the nature of N64 games. I was right! I definitely found it charming, and played it once in a while back when I was really into my N64, but I cannot think of a single notable memory with this game aside from the struggle to hunt down a compatible microphone.